How To Write A Corporate Video Script

A non-fiction corporate video script is presented in an entirely different way to that of a more familiar fiction screenplay.

While a screenplay has many rules around what you can and can’t do, covering things like formatting, terminology and presentation, a corporate video script is much easier to get your head around! 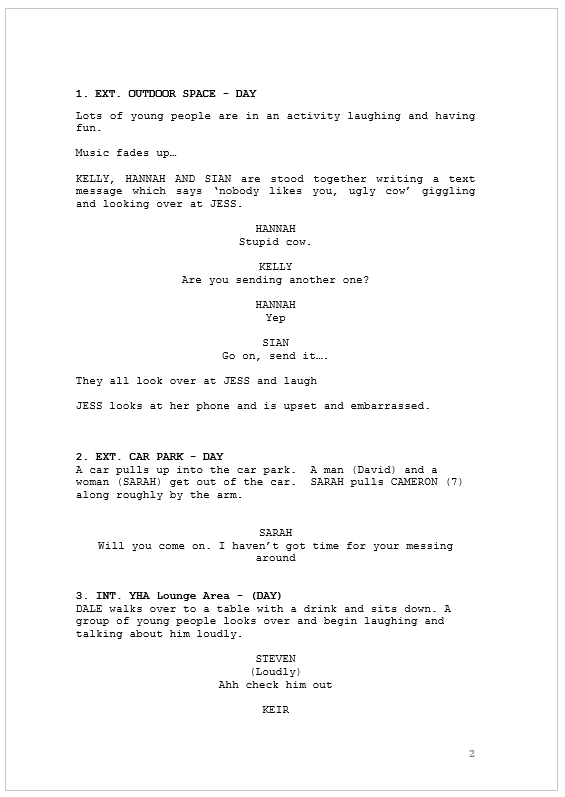 A corporate video script uses a table layout to present all the information required from the film. There are usually three columns, separated into new rows at regular intervals where the visuals or narrative progresses in the video. 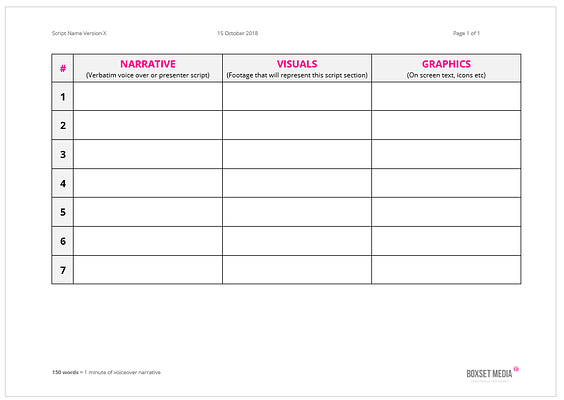 By structuring a script in this way, anyone involved in the project can see what is happening at any given point in a film. The narrative, visuals, graphics and on-screen text are simple to understand and edit, making the scripting process as simple as possible.

There are three primary columns of information in a corporate video script.

The narrative column contains all of the dialogue that will tell the story of your video, such as voiceover narrative, on-screen presenters, interview comments or a combination of the three.

If you are using a mixture of these, it’s best to either separate each one into its own column or make sure there are clear differences in the formatting of the text, so it’s clear.

If you’re writing a voiceover or presenter script, a minute of narrative equates to around 150 to 175 words, so be sure to keep an eye on this if you want to keep your film within a certain length!

If your corporate video is mostly interview-based, the narrative column in the script will need to be written differently. We don’t want to script interview answers word for word and spoon feed them to the interviewees. That’s not only a bit shifty but also takes away the naturalistic and spontaneous delivery that you want from an interview!

What you want to do is add in some bullet points of key messages that you want the interviewer to bring out from your interviewees. A list of questions will be developed further down the line, but for now, it’s important to see how the interviews fit in with the story overall. Some ‘template’ or ‘ideal’ answers can help to indicate how the narrative of the film will flow too, but remember ‘you can’t put words in your interviewee’s mouth!’

The second column of information in a corporate video script explains what visuals will be shown on screen during each scene.

Traditionally, this will be footage that is captured during a filming day. But this section can also include details on stock footage, photography or animated scenes if you’re scripting something like an explainer video.

Pay close attention to what is happening in the narrative column when describing visuals for a corporate video. Naturally, they want to support the narrative so make sure your visuals are relevant, exciting and can sustain the length of the narrative.

So if you have around a minute of voiceover narrative and your only visual is a shot of an aircraft taking off, you may need to think about shortening the narrative or adding in more visuals.

If the video is completely animated, there may be a storyboard alongside the script that shows illustrated examples of each scene.

Don’t forget that the script is meant to tell a story, so using expressive and creative language here will help stir up stimulating and inspiring images in the minds of the audience.

The third most important column is any on-screen text that is to be seen during the video. These could be, names and job titles of the interviewees, animated titles, technical terms used in ‘call out’ graphics or call to action text for the end of the film.

Including on-screen text in the script is particularly important if there are a lot of phrases that need to be checked for accuracy before production. Plus ensuring all spellings are checked and double checked before editing takes place.

Just like the ‘Visuals’ column in a script, any ‘on-screen text’ should be there to support the narrative and not be fragmented. Adding in on-screen text that isn’t referred to in the story in any way is likely to confuse the audience.

This might happen if you want to shorten down the film and move some voiceover narrative into on-screen-text, but it doesn’t help with engagement. It will only make your video look bloated and confuse the audience.

Similarly, you don’t want to bombard the audience with extensive bullet points or paragraphs of text. Keep it concise and essential to the story.

Narrative, Visuals and Text are the most vital sections to include in a corporate video script, but you may need additional columns for things like:

It’s vital that a corporate video script is shared with all stakeholders in the project during the writing stage too and that any feedback is considered and worked into additional drafts before it is signed off and production begins. Making script changes after filming or editing has started can be both time consuming and expensive, especially if it involves reshooting or scrapping scenes entirely.

So spending as much time as possible to make sure this stage of the production is perfect before filming, is well worth it!

Want to get your hands on the templates we use when writing scripts for our projects? Drop us an email and we’ll fire it over to you! Email studio@boxsetmedia.co.uk or find us on Instagram, Facebook or Twitter !

Discover the videos you need to build your brand effectively and easily in our easy-to-follow guide!

The 3 Goals That Work For Any Video Marketing Campaign

Optimise Your PC For Video Editing